Home / Living here / Do what you love / Sport at Hertford

Our students engage with sports at every level, whether it’s a casual kick-about or a national competition. We’re proud of our inclusive ethos but also enjoy significant sporting success.

All of our college sports teams welcome beginners, so whatever your prior experience and however much time you have to dedicate to sport, there’ll be opportunities for you to get involved. Many of our students and teams benefit from generous sports funding, meaning that there’s often no charge to attend training, matches and social events.

At our college sports grounds in Marston (around 15 minutes walk from Hertford) there are two full-sized pitches and a pavilion which is used as a changing room. We also have an on-site gym in college, all of which are freely available to use at any time. To find out more about teams and facilities at a University level, explore the Oxford University Sport website. 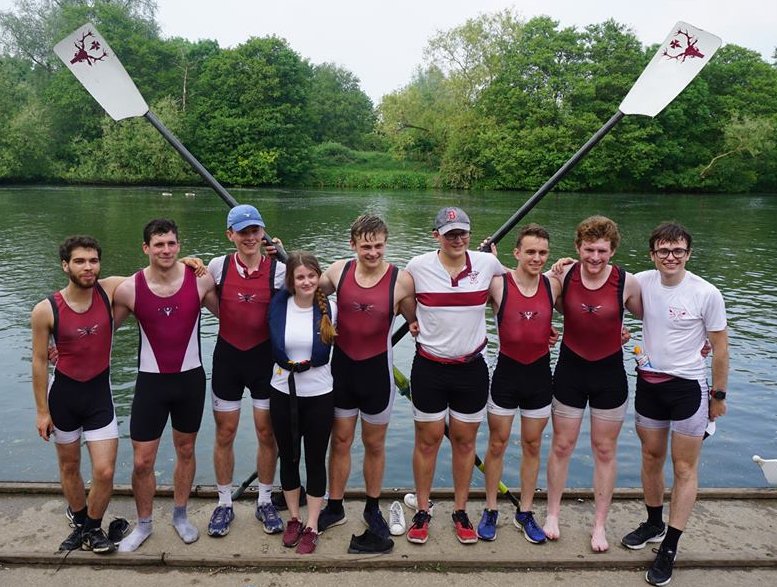 Rowing is one of the biggest sports in Oxford and Hertford College Boat Club is a great place to get involved with this fantastic sport whilst also making friends from all year groups and subjects. There’s lots of fun to be had, both on and off the river. The club caters for all abilities, including complete beginners, so whether you’re looking to keep fit, find a new casual hobby, or represent your college in one of its top teams, there will be a boat for you! The boat club is also one of the most socially active sports teams at Hertford, with cocktails, dinners and BBQs at the boathouse.

All abilities and experience levels are welcomed in the Hertford rugby club – despite high ambitions, they remain a relaxed club open to everyone. Men’s and women’s teams compete at all levels against other colleges.

Hertford has the most successful darts team in the University, winning the league for six years in a row. The team is open to all and anyone can get involved with our two darts boards in the college bar. We also have a second team in the league thanks to the popularity of darts at Hertford, meaning that there’s a chance for everyone who wants to be involved.

We have successful men’s and women’s football teams at Hertford – our women won the intercollegiate league in 2018 and our men have been nicknamed ‘the invincibles’! All abilities are welcome in both teams, each of which host regular social events throughout the term. The women’s team is a joint effort with Keble College so is a great way to meet students from across the University.

With both female and mixed teams, Hertford netball is a great way to meet new people and keep fit in a friendly environment. The teams compete in the University league and tournaments and have regular training sessions and social events. With weekly practices, netball is a fantastic way to learn a new sport, even if you have never played before.

Our cricket team is fun and relaxed but take games very competitively! They play matches every week in the summer term and welcome players of all abilities. They also regularly go on tour and have recently visited Budapest, Bucharest and Sofia. Both men and women get involved in the first team, and there are women-only events too.