The RGS-IBG Victoria Medal recognises outstanding geographical scholarship; we are delighted that this year’s recipient is the University’s chair of Geography and Hertford Professorial Fellow, Prof. David S.G. Thomas.

Dave started his academic career back in 1977, when he came to Hertford College as a fresh-faced Geography student. After completing his studies here with a DPhil, Dave’s first job was at Sheffield University, where he became Head of Department, before returning to Oxford in 2004 as the University’s Statutory Professor of Geography. Since then, he has served as Head of the School of Geography and the Environment and been Vice-President of the Royal Geographical Society.

Today, Dave is a geomorphologist and physical geographer specialising in contemporary drylands and the Quaternary Period. His research is also distinctly inter-disciplinary, concerning desertification, land degradation, sustainable land use and climate change impacts. As well as his research, Dave is a keen teacher: to date he has supervised over 35 doctoral students to completion, including many now in their own, often senior, academic posts.

This award – the prestigious Victoria Medal – was presented by the Royal Geographical Society (with IBG) at the society’s Annual General Meeting earlier this month. The honour recognises Dave’s phenomenal body of scholarship and original research into dryland environments and societies, with the RGS-IBG describing him as “a world-class scholar, internationally acclaimed for his outstanding record of research and for his promotion of geography, science and discovery”.

I am honoured and humbled by this award: it reflects not only on my efforts in desert and dryland research, particularly in Africa and Asia, but also on the wonderful people who live in these challenging environments and the colleagues I have been privileged to work with.

We congratulate Dave on this wonderful achievement and are very proud that a Hertford student has gone on to reach such heights in his chosen academic field. 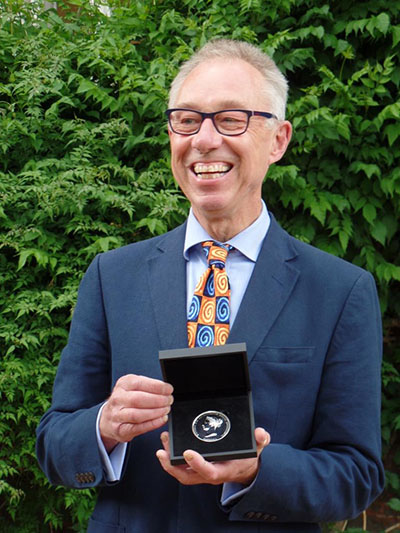 Photos courtesy of School of Geography and the Environment.