A week before the official social-distancing advice, I was in Copenhagen alone, enjoying what I thought would be a brief retreat from social life. Growing up in bustling Asian cities and then living in a big metropolis like London, I found Copenhagen ideal for having some time of my own. It was exceptionally clean and green, big enough to have plenty of things to do yet small enough to reach everywhere by walking or cycling. It was also visually stunning, with the modern weaving seamlessly into the historic. My senses oscillated constantly between the awe for the elegant aura of traditional Danish things and an irresistible familiarity of the glassy and somewhat dull memory of home. 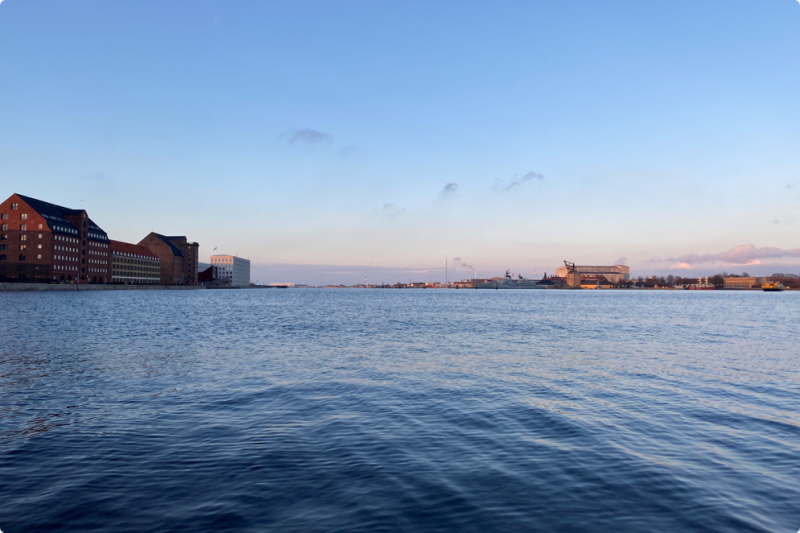 Travelling alone and having no strict itinerary, I acquainted people who would otherwise just fade into the not-so-crowded streets. Anastasiia was a professional photographer I met up with on my second day in Copenhagen. I came across her on my random Airbnb browsing, and decided that she’s the perfect solution to the solo travel issue of not having my own photos. Anastasiia grew up in St Petersburg. She moved to Denmark a year ago to live with her boyfriend, and “hopefully”, she joked, to get married. We quickly bonded over our shared experiences of living abroad. As we wandered in the quiet yet majestic old town of the Danish capital, she rattled on about her hometown, that it had sprawled out like a huge spider web to the destruction of its own beauty, that in comparison Copenhagen was a tiny flimsy ladybird, and that she somehow missed it everyday still.

She was a wonderful photographer with a map of Copenhagen’s hidden pretty spots in her mind. We played on a swing in a somewhat empty playground, casually sat on the moss-covered bench in an old pub’s peaceful courtyard, and sneaked into a near-abandoned small alleyway where the only evidence of life was an oddly new bicycle. When I moaned that over-crowded bookshop cafes (nonetheless a must-go) had deprived me of the pleasure of enjoying my coffee, she took me to a rooftop cafe she claimed was her favourite. The customer-drawing panoramic view was mediocre, she said, but the flat white was best in town. We filled my tray with her favourite flat white and pastries before waving goodbye. 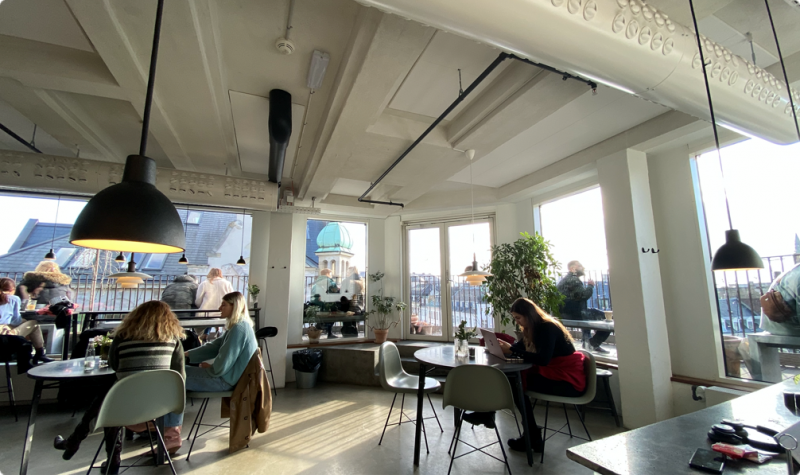 The 10pm Happy Hour at the hotel was also a convenient social occasion. Many guests would come down to the cosy little bar to enjoy unlimited free liquor. With a glass of twice the standard amount of whiskey in my hand, I joined a circle of four. Two were frequent business travellers from New York to Copenhagen. “The gloomy winter here is just depressing”, one said, “but Freetown Christiana is great as always.” I duly took his recommendation and went the next day, only to be surprised by my newly-discovered intolerance to the intense smell of weed. When I told them the next day they all found it incredibly amusing, which seemed to be the only good outcome of the ill-fated Christiana visit. The other guy from Australia shared with us his personal memory of the Kangaroo Island, made all the more moving by the Island’s near-total destruction in the summer bush fire. We reflected on how the Southern hemisphere being ‘the less important half’ made the extremely tragic event yet another distant story in the news, a view point the two Americans found refreshingly novel and stimulating.

But for most of the time I was just embracing the rare solitude granted by the solo escape. I spent hours roaming in the near-empty New Carlsberg Museum, and sat on a chair gazing at a Berthe Morisot painting, in which a modestly-dressed girl was braiding her ginger hair gently. The atmosphere was immensely tranquil, and casted her casual act in a serene light. The room was dedicated to Morisot, whose perceptive artworks have long been left out of the spotlight occupied by her male impressionist counterparts. It felt significant that in this small gallery room we celebrate her, not alongside anyone more recognised or controversial, but in her own right. 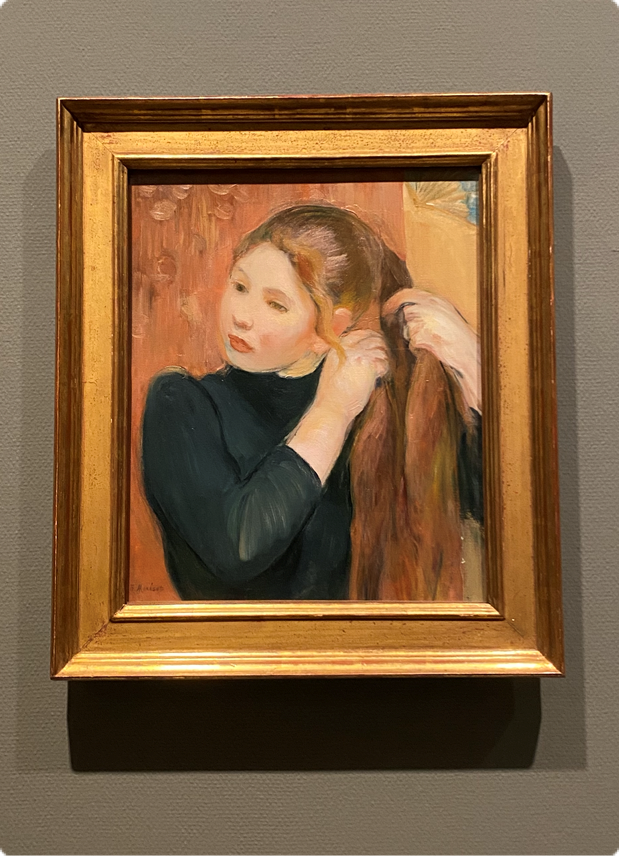 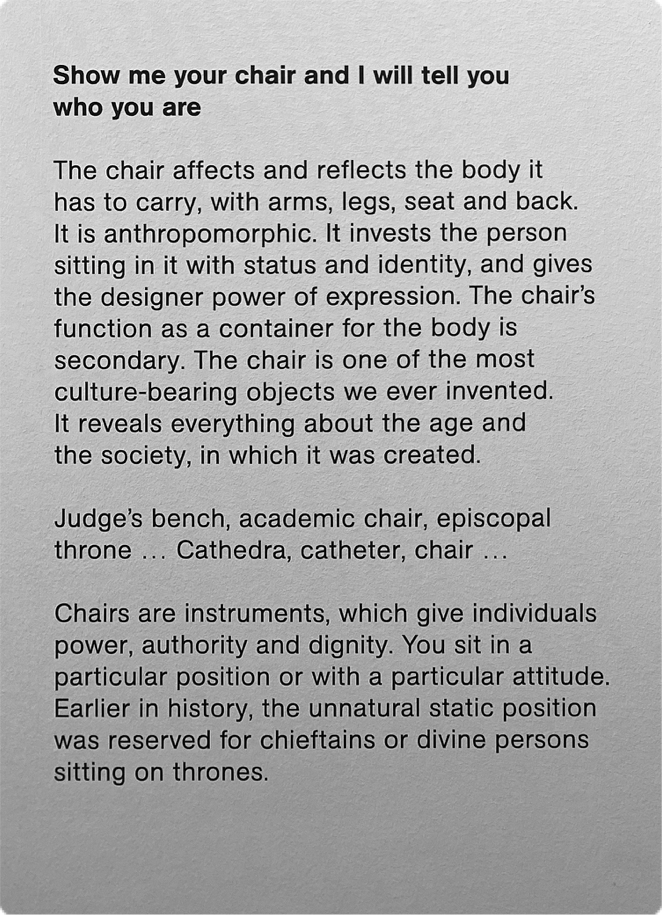 Mindful of the week-long escape being technically the ‘reading week’ of my law-conversion course, I did some law reading in the impressive park-facing theatre in the National Gallery – although the exceedingly green park proved too big a distraction that I ultimately strolled into it. I had some amazing Danish potatoes in a proudly Danish bistro, studied the surprisingly multi-faceted human-chair relationship in the Design Museum, and said hi to the little mermaid, whom I share my name with.

And I took a long walk along the sea. It was two hours before sunset and Copenhagen was getting a little hazy. The Ofelia Plads, a waterfront platform which extends a long way into the sea, had a huge art installation featuring a triangular tunnel in which various sounds mimicking the sea were played. Walking through it, I was amazed that the sea could trigger so many sounds and shapes in human imagination, each associated with unrelated pieces of memories coloured by miscellaneous moods. At the end of the tunnel was the sea. It was so close that I could almost walk into the enticing blue. The distinct scent of the sea melted into the crisp air, the greyish sky, and blended into the chilling wind which touched softly – an overwhelmingly melancholic winter vibe wrapped around me. Knowing that my brain must be romanticising it all too much, I looked away towards the city, where street lights just lit and the glowing warmth of earthly life awaited. I walked back, picked up a delicious yogurt and granola pot from a Seven-Eleven on my way, and flew back to London the next day.

Although it has only been a few weeks, this trip already felt like something that only ever happened in my dream. I remember floating like a light and joyful spirit in the city, feeling surreal that no one seemed to have noticed the coronavirus despite it making its way deep into Europe. It became all the more remarkable that Denmark went into lockdown a few days after I returned. And thus here I am, sitting by my balcony where the setting sun comes through in a delightful pink, immersed in waves of thoughts for the breathtaking blue of Copenhagen. 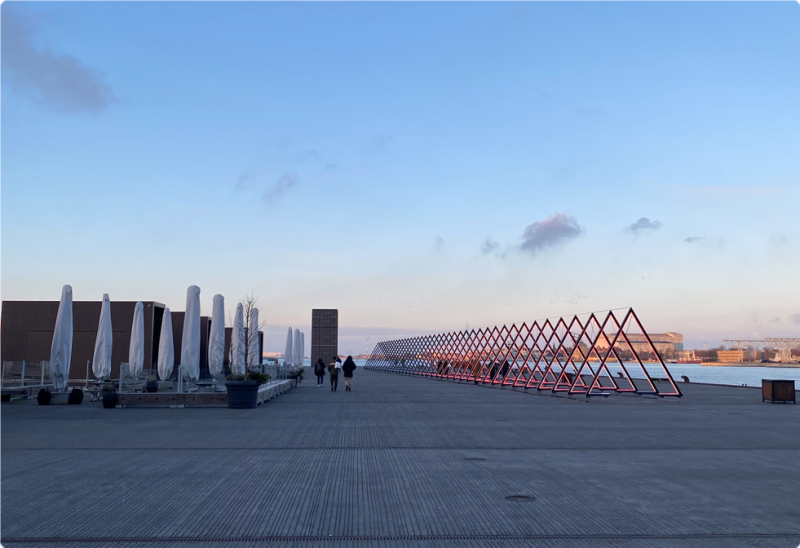