Home / Alumni / Publications / Hertford Blog / Being an Olympian with no Olympics

Life in lockdown: how it feels to be an Olympian with no Olympics

The focus, sacrifice and (lack of) work-life balance needed to make it to the top in sport leaves me in awe. I like to think of myself as driven, dedicated, going above and beyond for my team, but having spent most of my career working alongside elite athletes, I can promise you, my work ethic is nothing on theirs. The relentless demands of both mental and physical preparation it takes to become world class in their discipline leave them no option but to forgo many of the everyday luxuries we take for granted.

Time with friends and family is hemmed in by an intensive training regime. Their diets are strictly controlled. Their holidays and ability to attend birthdays and weddings are based on boot camps and competition dates. Putting themselves in a situation that, however much fun, might risk them getting injured could mean game over. Athletes commit themselves to their sport as a vocation, because they love it and because a combination of talent, tenacity and timing has given them this opportunity and they intend to grab it with both hands.

Amongst these inspiring people, there is a group we know as Olympians and Paralympians. They compete on the global sporting stage day-in-day out, but there is only one short period every four years where they go head-to-head in front of the eyes of the world. I don’t know about you, but I’m a true victim of Games-time fever. For a nearly five weeks from the Olympic Opening Ceremony to the Paralympic Closing Ceremony, I’m obsessed.

Badminton, taekwondo, modern pentathlon, canoeing, you name it, I’m there, glued to the action as if I’ve been avidly following the sport all my life, devouring stats that I immediately drill into anyone unfortunate enough to walk into the same room as me. There’s something magical about the Games. Like those Olympians and Paralympians, we wait for it to come around every four years, not realising we’ve been holding our breath until it arrives and it’s time for the television to get more attention than it has done since the world’s best last descended on a chosen city to test their sporting mettle.

All that preparation for one moment in time. Yet in 2020, as all eyes were turning to Tokyo, the Olympics had to be cancelled for the first time since World War Two, the Paralympics for the first time since they were inaugurated in 1960. This week I was lucky enough to get a snapshot of how that feels from Zoë Lee, a 34-year-old competitor at the top of her game, ready to take on the world once more, but halted in her tracks. I’ve known Zoë for years, since our university days (when if anyone had handed me a map to becoming an Olympian I’d have probably been found shortly afterwards holding it upside down).  Intelligent, kind and unassuming, Zoë’s won a historic Olympic silver with the women’s eight in Rio 2016 and remains a sportswoman to be reckoned with:

“On hearing that the Olympics was postponed we experienced a whole range of appropriate emotions. It had seemed like such an inevitability in the weeks before that, for many of us, there was almost an initial relief to be able to stop acting like everything was normal and be given a chance to acknowledge that the world is in crisis. It provided a full stop to the competitive season and allowed us all a moment to pause being robotic elite athletes and engage fully with the experiences of our families and friends in the ‘real world’.”

“Since the dust settled on that initial announcement, feelings and emotions have been widely divergent across the team. We’re taking it one session, one day, one week at a time, much like the rest of the country and the world.”

“As an Olympic sport, rowing is heavily defined by the four-year Olympiad. No doubt, some athletes having a season plagued by illness or injury will see the postponed Olympics as an opportunity to show coaches and selectors what they’re capable of. However, there will be older athletes eyeing up post-Olympics retirement questioning if they want to put their future career plans on hold for an additional year. Some already have jobs lined up, or university courses they’ve signed up to. Mostly there are a lot of athletes who are just grumpy not to be able to dig their competitive teeth into anything this year, eager to build on last season’s successes or avenge defeats.”

“The intense media scrutiny of the pandemic alongside the anxiety and unknowns about how we’ll move from national lockdowns into a more globalised society again drive regular speculation about the now 2021 Games being cancelled altogether. If we let ourselves get caught up in that we’ll struggle with our motivation and momentum, so we’re just doing our thing; training as best as we can in our home environments and enjoying the structure that training gives us.” 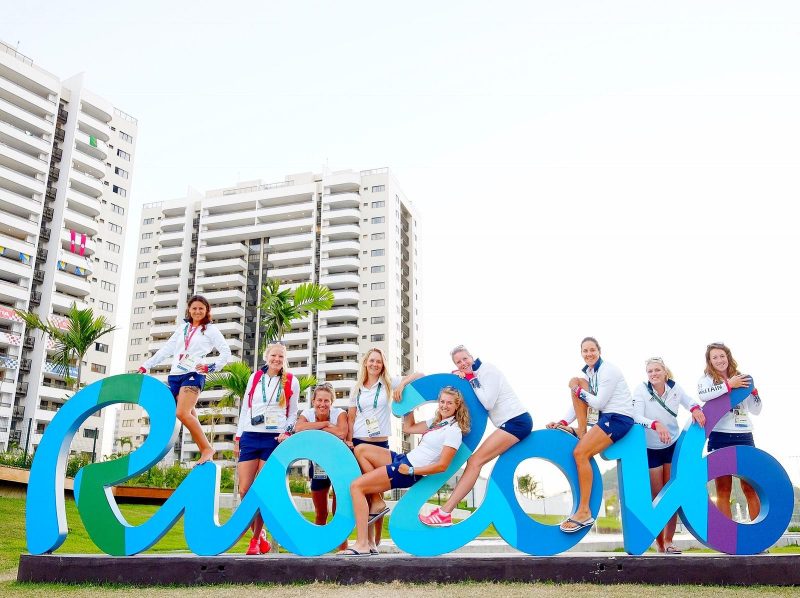 Fans must defer the delicious feeling of anticipation that surrounds every upcoming Games. As we wait with bated breath, the jolt out of the regular cycle may provide an opportunity for Olympic and Paralympic partners to be more creative than ever. With plans temporarily turned on their head, now is a moment to embrace the pause and innovate, as we heard in ESA’s webinar last week, The Olympic Time Trial. But the athletes have structured their lives to have laser-focus on one goal. Suddenly the goal posts have moved, and not a touch, but what feels like out of sight.

“Lockdown has been a strange time for the British Rowing Team. We’ve moved from training in a busy centralised environment to suddenly being confined to home. Kitchens, living rooms, garden sheds and garages have become our gyms. Next to the sofa is the dreaded erg – a torture device for rowers, because we prefer to be out on the water!”

“In the weeks leading up to lockdown the season was shrinking before our eyes as one by one international races were cancelled. It seemed like it would only be a matter of time before the Olympics would also be cancelled. When the news was announced, we were already training from home and starting to adapt to our new normals.”

People I know across all industries feel dislocated by not physically working alongside colleagues, postponed annual reviews, the inability to create or attend live events as part of their day job. Layered onto our professional pressure is a personal one. Some of us (including me) are housebound so we can be with shielded relatives. Others are in a high vulnerability group themselves or separated from vulnerable friends and loved ones for an unknown period of time to protect them.

Many households that are homes to deeply talented people are feeling the toll of temporary unemployment programmes such as the furlough scheme in the UK.  What must it feel like for our Olympians and Paralympians? These national heroes who we rally behind during the Games have experienced an earthquake in isolation as the nation’s support has been bottled and popped on ice ready for 2021 (we hope).

“It has taken quite some time to adjust. I usually train with a big group of fierce and feisty fellow athletes who create an exuberant and lively atmosphere. Without your team to keep you upbeat and energised, training can be really tough. For me, things have been especially quiet, and quite lonely, because I’ve been home alone throughout lockdown as my partner is a surgeon working in the NHS and living with other doctors. It’s been really hard but has seemed to be the most sensible arrangement given his high exposure to the virus.”

“The other difficulty in training in this ‘new’ environment without the structure of the upcoming competition is staying motivated. The training programme is similar to our normal plan for the time of the season with added flexibility to enable athletes to do more cross-training activities like cycling for a change of scenery from the screen on the rowing machine. I’m thankful for the sunny spring weather so I can get out on my bike more and let some of the training minutes tick down on the roads.”

For many of us, our new lockdown routine has dictated our lives for enough months that it’s starting to feel familiar, to offer a comforting cadence that we used to get from our commute and regular commitments outside the house. Our diaries are filling up with remote routines as we learn to build relationships at a distance. The practices I use to stay close to my friends around the world, are now the practices I use to keep in touch with my friends, full stop.

We’ve been tested and are adapting more quickly than we might have thought possible. There’s a communal defiance, a determination not to let a pandemic get the better of us, and a sense of opportunity, for change, for reflection and reinvention. Is that same shift taking place in the Olympic and Paralympic communities? Will Tokyo 2021 be Tokyo 2020 but one year later or a different Games altogether?

“Lots of athletes retired following the Rio 2016 Games, so the delayed 2020 Olympics will give a lot of the next generation of athletes an extra year on the senior programme to develop physically. Lots of incredible athletes who could be first time Olympians in Tokyo are still on a really steep improvement curve so this could be a really good opportunity to get further along their development journey to (hopefully) become an unstoppable force by Tokyo 2021!”

“In 2019, we had a record number of U23 world champions. These athletes are set to filter into the mix ahead of Paris 2024. The best of them will no doubt feature on the fringes of the senior team during 2021, but many would have fully transitioned into the senior team at the start of the four-year interval between Games. It will be interesting to see how the now reduced duration of the 2024 Olympiad impacts them in Paris.”

“My advice to the younger athletes, especially those already in the team, is to use this time wisely. We don’t get much time to ourselves on the high-performance programme so now we can recalibrate with why we love rowing and what drives us to be the best athletes we can be while we enjoy time with our families and partners. The flexibility we currently have in the training programme will evaporate when we’re back at the centralised training base. This is a novelty for us, especially in the spring and summer months when we can be away for whole months on training camps and at competitions.”

It strikes me time and again writing these blogs and chatting to friends and colleagues, that there’s a lot which is disconcerting about the times we find ourselves in, but also a lot of hope. As we look to the 2021 Games, I’m convinced that we won’t see Tokyo 2020+1 but a new and exciting event that we couldn’t have imagined a few months ago. As for whether there’ll be a Games in 2021? Let’s follow Zoë’s advice and take life one day at a time.

Personally, I can’t wait to see the next incarnation of a sporting extravaganza I love – although I’m less sure the friends and family I’ll be boring with all my factoids are…