The first Simpkin arrived in the early 1970s with the Warnocks when they took up residence in the lodgings.

Sir Geoffrey and Lady Warnock had had many cats in their time but had decided not to keep pets after their move into college in 1971. However, their daughter’s lute teacher, Blanca Bartosova, who had become a close family friend, had managed to acquire a black and white kitten while on a trip to Cornwall. Upon returning to London she discovered that she was not allowed to keep pets in her small flat and instead gave the cat to Fanny Warnock to take home to her parents. Sir Geoffrey was originally very reluctant to take in a new animal, especially within the college setting, but once out of his basket, the small kitten jumped onto the sofa where Sir Geoffrey was sitting and then onto his shoulder, before curling up on his lap.

Simpkin had been named by Blanca after the cat in the Tailor of Gloucester, and quickly established himself as a fixture in the college. He loved the attention he received from the students and staff, and over time took up a secondary residence in the lodge, where he would regularly eat and sleep. In his early years he spent much time in New College, having found a number of ways into the neighbouring college over walls and across roofs. He once managed to get stranded on a high roof at New College to be rescued by the fire brigade who had been called by their college bursar. 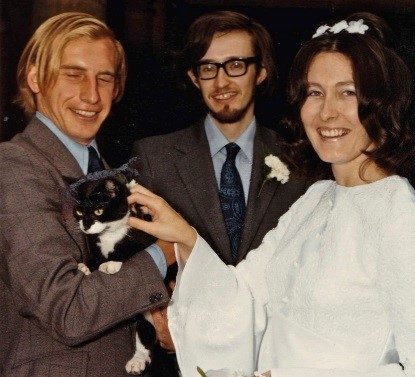